On August 6, 2015 we celebrated our 10 year anniversary themed "Celebrating Confidence".  It was a night to reconnect with past and present teammates, coaches and supporters known as 'g.a.b family members' to celebrate the achievements of g.a.b over the last 10 years.

The evening started off with a greeting from our Board Member Malado Callaghan as she ushered 'g.a.b family members' to hand in their tickets to our youth volunteers: Chloe Sterrett & Olivia Nassar.  Both ladies created the preliminary plans for g.a.b’s anniversary in their Marketing Class at Senator O’Connor College School back in November 2014.  It was the handiwork of event planners Stefanie Pavarin-Tome & Leanne Prade who made the night run smoothly.

Before entering the Ada Slaight Hall at Daniels Spectrum, 'g.a.b family members' walked down the red carpet and posed for our camerawoman, Claudia Marquez. 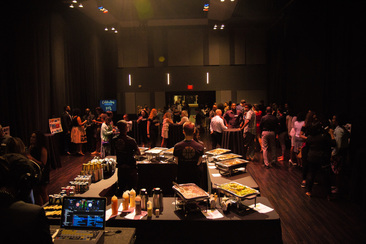 Once inside, 'g.a.b family members' browsed through the 2005-2015 picture boards that volunteers Chloe Sterrett & Marco Bordea put together.  The food was very good as it was catered by Tasty’s Caribbean Restaurant and beverages were sponsored by Clement Chu.

While socializing and reminiscing on pictures of the past, 'g.a.b family members' were able to watch profiles of past g.a.b participants achieving success off the court on television.  The reception room was buzzing with laughter, chatter and music that was provided by DJ Kevin Hood from Roots Redemption.
The evening then moved into a seated theatre style room where g.a.b family members were welcomed and entertained by our MC, Tamara Moona.  A video presentation began by honouring two male coaches who have been committed to inspiring and building confidence to our g.a.b girls: Omari Wilthsire & Devin Munro.

Though Devin and Omari were honoured, g.a.b recognized all of its coaches and took a moment to applaud them.  A second video presentation showcased a number of g.a.b youth who shared how g.a.b has helped them with their confidence and other heartfelt testimonials over the last 10 years. 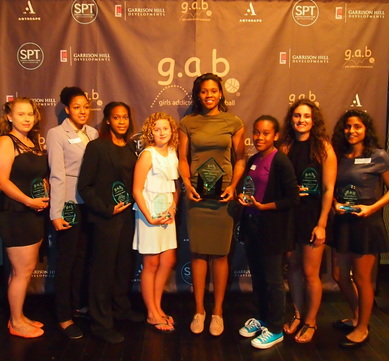 Tanya Callaghan, the founder of g.a.b was called upon the stage to share the history of how g.a.b as an organization was created and built.  She told the g.a.b story by honouring the mentors who helped shape her confidence by having them stand on stage while she told how that person inspired her.  Tanya used the “Pay it Forward Model” where each mentor presented an award to a g.a.b girl that reflected Tanya’s story on how g.a.b was formed.

g.a.b was created out of eight characteristics and was inspired by the following mentors who then gave out the award to our g.a.b youth:

The seated presentation ended with a final video presentation showcasing photographs of all the programs from 2005-2015 with Sister Sledge’s song “We are Family” playing in the background.
Once the presentation was over, g.a.b family members were invited back to the reception room to eat the delicious homemade cupcakes by Becki Johnson, short bread basketball cookies courtesy of Anne-Marie Lamantia and mini mousse cups from Tasty’s Carribbean Restaurant.
Truly, August 6, 2015 was a night to celebrate confidence! 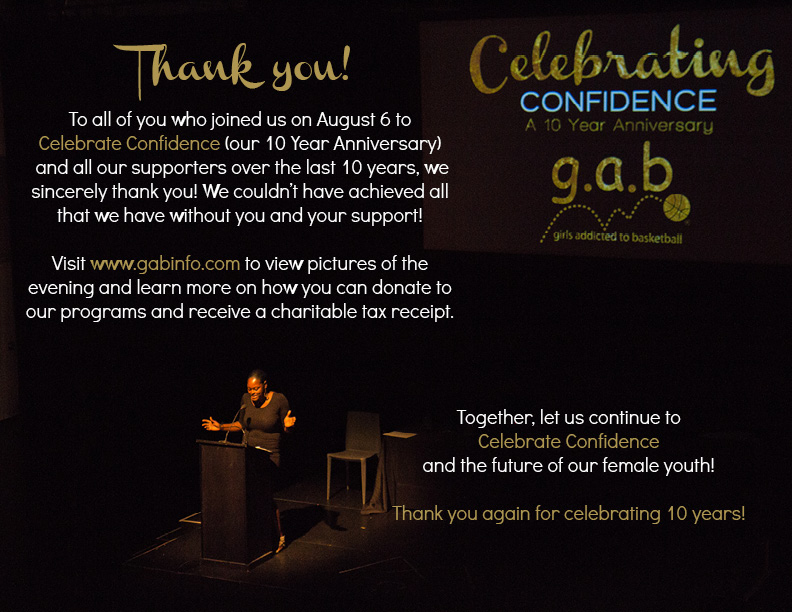